If You're Looking for Information, We've Got You Covered.

Looking for the latest news on what's going on in and around LOOP-LOC or our industry? You'll find it here. As a leading global manufacturer, we believe it's important to keep consumers and dealers "in the loop" about pool safety covers and fences, as well as luxury pool liners. Take a look.

BABY-LOCÂ®: When the cover comes off, the fence goes up!

BABY-LOC®: When the cover comes off, the fence goes up! Read More

Spring Up Your Pool For The 2014 Pool Season

Spring Up Your Pool For The 2014 Pool Season Read More

Getting Your Pool Ready for the New Season

Liners and Covers: Getting Your Pool Ready for the New Season Read More

Myths and Facts About Vinyl Liners

Why should I buy a Loop-Loc Stock Cover? Read More

We wanted to take this time to let you know that unfortunately in today's internet world there are many scammers and companies that practice bait & switch tactics. Read More

A Picture Is Worth a Thousand Measurements

Taking Care of Your Cover in March

When temperatures of 60 degrees or higher, you should start treating your pool. Read More 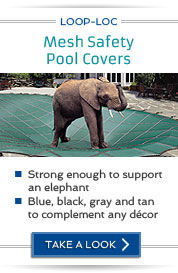